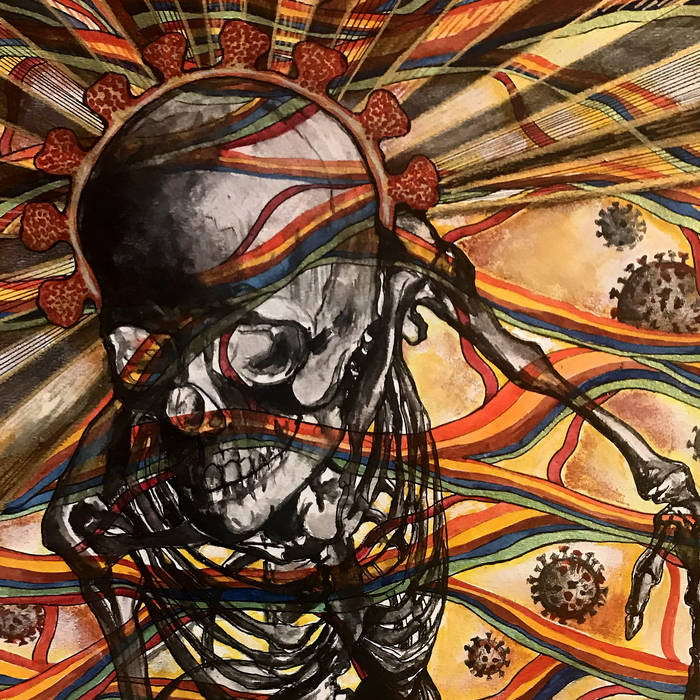 Riding Back From Hell
After the release of Dark Ides of Summer in July 2018, we had a little break. It wasn’t so much voluntary as necessary, as we all found life pulling us in different directions at the time, and I found myself ‘on the road’ pursuing other projects for about a year. One result of this was Istarted working on music by myself in an effort to stay engaged, and the best tool for this is the good old acoustic guitar. I busted out my Ovation, the same one I’d used for recording the acoustic tracks on Wolf Age (White Mountains) and on Morningstar (Morningstar VisionaryMix). Some people don’t know this but most of Wolf Age was born out of Gary Lesikar (Frank Faust) and me sitting around jamming on our acoustics with copious amount of ‘Ice-Cold Budweiser’ and yes a few times it was even around a campfire. I thought about those nights a lot as I sat around jamming by myself into the wee hours of Saturday night. The ghost of Gary always makes me wonder how things might have gone had he lived, and so maybe a part of me thought I could just pick up where we left off. A lot of the old Asmo songs even up into Sanctuary were originally composed on acoustic, so they were
easy to revive. As I started to run out of old Asmo songs, I began a deep-dive into traditional Folkish, Western and Country music. I studied the greats like Hank Williams, Walon Jennings and George Jones – Gary had turned me on to all of these in back in the day but only now could I grok it, only after so much chaos and ramblin’. I studied the innovators like Bob Dylan and Neil Young, and then of course the dark lords of my generation like Death In June and the Marionettes. Then somewhere out of all this a few new songs started to emerge.
When the bands schedules started to come back around and we re-assumed our weekly Thursday night ‘clubhouse’ meetings at The Blue Room, I brought along my acoustic to show the guys the new songs I was working on, and what can I say…the guitar just never went away.
It felt like the ghost of all the people who had been in and out of the group over the years was being evoked – all the Gary’s, Brad’s, Allison Skott’s, Tigs and Kali’s. Suddenly it seemed pretty miraculous that the three of us – Joel, Vas, and Paul – were even still alive let alone still
standing around jamming together. It really did feel like we were Riding Back from Hell. We spent maybe six months jamming the songs unplugged before we even bothered to figure out some kind of rhythm.
We discovered a lot of those old Asmo Songs – like The Bright Ones – lend themselves really well to acoustic versions, and that in so doing new levels of depth and warmth are revealed in them. The albums-worth of new songs we were doing all had a pretty apocalyptic
feel, maybe we had a premonition of the Coronapocalypse that was just around the corner, or maybe we were always just that Apocalyptic, but when the pandemic hit we knew it was time get some of these tracks out there to mark the occasion. So here it is – the Black Fire EP. If it all goes well it will be followed up by a full length album will be called maybe Riding Back from Hell or maybe Farewell to the West, who knows? But for now here’s four great songs to lament the death of the older world and the illuminate the apocalyptic times before us. If you’ve followed us this far, we think you’ll appreciate the evolutionary change, which is as much a reiteration of our late-90’s neo-folk roots, as it is a
natural process of maturation. But you have to remember – that old world is dead. Fortunately for you, these tunes are all perfect for humming while bidding a fond farewell to The West.

Four great songs to lament the death of the old world and illuminate the apocalyptic times
before us.

Track Listing:
1. Farewell to the West
2. The Bright Ones (Slips Away Edit)
3. Riding Back from Hell
4. Black Fire

All songs recorded between 2019 – 2020 at the Blue Room Studio on the South Side of Houston, Texas.

Bandcamp Daily  your guide to the world of Bandcamp